The House of ALLAH -KAABA

There is a certain amount of difference of opinion if Adam A.S. First built the Kaaba or if The Kaaba was built before this by the Angels. However, some believe that the creation of the earth originated from the place where the Kaaba is now. Initially, everything was covered in water. Then something appeared in The shape of a bubble in that place. So The rest of the earth spread in all directions. When the flood came in the time of Hazrat Nooh A.S. The point was lifted. Thereafter Hazrat Ibrahim A.S. and Hazrat Ismail A.S. built the Kaaba in a place shown for them for ALLAH, the exact place where had been previously, as described in the Ayah in the first juz of the Koran. In a Hadith, we read: “When ALLAH Almighty sent Hazrat Adam A.S. to the land of paradise, He also sent his house and said:

OH, Adam, I’m sending you My house, so he performs Tawaaf around him In the way, Tawaaf is performed. around my throne; And pray to me in it.s address in the same way that it is being prayed in the direction of Me Throne. “Then when the flood came during the time of Hazrat No oh A.S. The house was raised. Then the prophets used to perform Tawaaf around that place (although the house was not there). ALLAH there Then he revealed the place to Hazrat. Ibrahim A.S. and ordered him to build the house. (Targheeb – Munziri) In another Hadith, it is said:

“When Hazrat Ibrahim A.S. completed the erection of the Kaaba said:

‘OH ALLAH, I have completed Your holy house Then ALLAH answered:

‘OH ALLAH, how Does my voice reach them? and Allah replied; ‘You will announce my order and I will make it come to them. 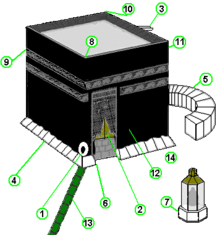 Then Hazrat Ibrahim A.S. called To the world announcing the pilgrimage and everything on earth in The heavens heard it. (Some may feel that this is a bit far-fetched, but we live in this era of the Radio where the voice of a person is caused To be heard in many lands, and television, where something is seen in a place, is made to be seen in many lands at the same time) should not I find this impossible to believe that The creator of the inventors of the radio. or and television should cause one .

Words of the prophet to be heard in many places, According to another hadith, we learn that each person will hear that voice And answered LABBAIK (I’m present) The same cry pronounced by the Hajjees. while in ihram, whoever ALLAH is great Ted the good fortune of performing Hajj pronounced the LABBAIK at that time. The Hadith also states that each A person, already born at that time. or even in the work of souls, to born at a later time, who recited the LABBAIK will surely be awarded the opportunity to perform Hajj. In other Hadith says: whoever recited LABBAIK will once perform the Hajj once, and whoever recites it twice do Hajj twice, and the number that is R of times LABBAIK was recited at many times they will perform Hajj. Ho Fortunately, they were those souls Who recited the LABBAIK on numerous occasions.