THE BATTLE OF THE KHANDAQ (خندق) TRENCH IN ISLAM

THE BATTLE OF TRENCH (خندق) IN ISLAM

The foundation of the initiatives of the Islamic faith dates back to the beginning of the seventh century. When ALLAH has chosen Hazrat Muhammad (PBUH) as His last Messenger or Prophet. When Hazrat Muhammad (PBUH) declared about the first Revelation of the Qur’an and told the people of Quraysh that he is the Final Messenger of Allah. But they denied it and they became the worst competitors of those who recognized Islam and worked them both physically and mentally. This condition was addressed to the mass migration of Muslims from Mecca to Medina with the permission of ALLAH.

Arabia was occupied informally by several Arabic-speaking peoples, at the time of the first battle of Islam. The maximum inhabitants of the Arabs were followers of recurring polytheistic religions and many tribes follow Judaism, Christianity, and Zoroastrianism.

When Hazrat Muhammad (PBUH) told them that he is the last Messenger of ALLAH. But they denied it. Then, He (PBUH) continues preaching to his tribe first secretly and then openly. The Quraysh tribe was amenable acts of ferocity committed against the Muslims in 622 AD, then he and his followers traveled to the neighboring city of Medina. This migration is called Hijra and the base of the government of Hazrat Muhammad (PBUH) is noted as a political and also a religious leader. 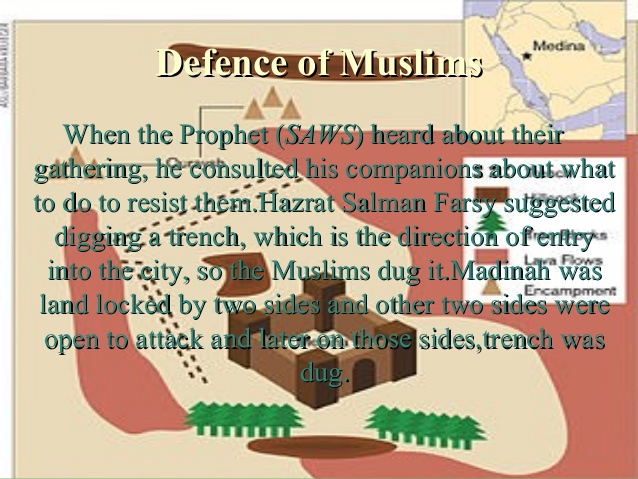 After the Battle of Badr and Ohad in 624 and 625 AD, respectively, the next expulsion was close to them. They knew the Quraysh, therefore, they dug a trench to disable the enemy cavalry. The reason behind this battle (خندق) trench was to protect the Medina from attack. After the tribes, Banu Nazir and Banu Qaynuqa formed a grouping with the Quraysh to attack it. In retaliation for expelling them from Medina during the Assault.